You remember waking up.  You have some vague . . . impressions of before.  You remember quaking before the judgement seat of God.  You were too sinful for Heaven, but had enough love to escape Hell . . . and yet for reasons you do not yet know Purgatory also would not take you.  So you were sent back and in your mind’s eye you see faces.  Others like you . . . and one who isn’t, one who you sense is in grave spiritual danger, and in saving his soul, maybe, just maybe, you can save your own.

You go forward to find your new allies, simultaneously excited and horrified by the Fire, the Light and the Water that now accompanies the Dust of your body.  You have the spiritual weapons of the Angels within your body, your body that lacks a heartbeat . . . .

What You Will Need

You are one of the rejected ones, a Final Evangelion.  All three realms of the Next Life rejected you . . . at least for now.  Heaven has revealed to you faces of souls who are in danger of dying soon . . . and whose souls rot in mortal sin.  Nonetheless a seed of light is in these souls, a seed that is struggling to grow.  These souls are conflicted about the life they have chosen.  You are to be their last gospel, and in doing so, hopefully, find grace yourself.

You know their face, you know where they are and you have some instincts about the current state of their soul.  Other than that, you know them not from Adam or Eve.  As they approach their probable demise, the forces of Hell will be seeking to keep them among the damned.  It your job to show them the better path.

As an Evangelion you look and act human, if a bit pale and cold to the touch, but you have no heartbeat.   The Walking Damned can see the glow of hellfire in your eyes.  You are a weapon of the Wrath of God – but in service to a soul’s Salvation.  Mortals are often uncomfortable around you, perhaps subconsciously sensing the hellfire and having a guilty conscience.  When you have saved enough souls to pay your debts and fulfill whatsoever Providence wants you to learn by enduring this trial you will turn to dust and your soul will be able to enter the Gates of Saint Peter.

As a disclaimer, this game mixes some theological themes with some high fantasy, and should not be seen as an accurate depiction of any religious sect's beliefs.  Some inspiration for this game came from my love of the Hellboy Comics and my love of the fun monster hunter movie Van Helsing.  There are lots of pop culture references that are clearly inspired from the Abrahamic religious tradition.  This game seeks to use those themes to create a storytelling experience that places at its center the belief that even the worst of the worst can change their life, and that grace is hunting for us all. 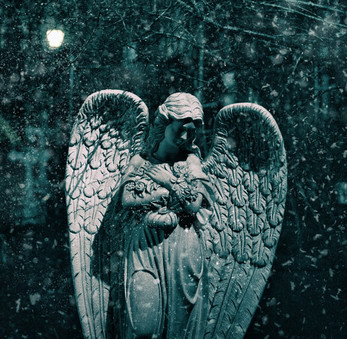